Research Report on the Application of Electronic Evidence Preservation

Electronic evidence preservation refers to the process of fixating the electronic data on a webpage and storing it in a secure and stable database, which can be retrieved when needed. Meanwhile, the above process is recorded and transmitted in a reliable way, in order to prove that “this electronic data was this at that point of time”.

In terms of evidence validity guarantee mechanisms, the current third-party evidence preservation tools can be split into three types:

The key to this type is that courts must understand the product theory behind the evidence preservation agencies.

Involves security guarantee measures with hash encryption + consensus mechanism and decentralized large-quantity core bottom-level technology, not yet in widespread use; in June 2018, the Hangzhou Internet Court accepted the legal effect of blockchain evidence preservation for the first time.

On the whole, electronic evidence preservation technology can address the challenge of the complex Internet environment; as a method for risk prevention, it can also address the issues of remote signing of Internet finance companies, online copyright authorization of works belonging to culture & creativity companies, etc.

Technical key: how to accurately extract and transfer electronic data information and store it as evidence, and guarantee the content is stored in a safe and secure database, where it will not be lost or tampered with.

1. The electronic evidence preservation service provider must be an entirely independent and neutral third-party subject.

2. The electronic evidence preservation technology must be reliable.

3. The operation method of electronic evidence preservation must comply with laws and regulations.

1. No change occurred to the electronic data itself

2. Based on appraisal opinions on a case-by-case basis, the law judges the inherent authenticity and legality of the electronic data evidence

3. Unlike notarization, courts must examine and verify the level of authority of the third-party evidence preservation agency, and are able to choose not to accept the validity of the third party agency’s certification.

(3) Attitudes of the parties

2. In September 2018, the Provisions of the Supreme People's Court on Several Issues Concerning the Trial of Cases by Internet Courts, Article 11 stipulates as follows: “electronic data provided by concerned parties should be authenticated through evidence collection, fixation, and anti-tampering methods including electronic signatures, credible time stamps, hash value verification and blockchain etc., or electronic evidence capturing & storage platforms; those which can be verified as authentic, should be confirmed by the Internet court.” Such a provision recognizes the methods for electronic evidence preservation (e.g. credible time stamps and blockchain) in the form of judicial interpretations.

3. Chief Judge of the Third Civil Tribunal of Beijing Chaoyang People’s Court, Zizhu Li, once stated: “This type of technology provides a new approach and method for involved parties to gather fixated electronic evidence, and through technical means of the third party, can to some extent avoid the problems incurred by self-collected evidence, including arbitrariness and lower credibility. It is extremely meaningful in judicial practice.”

4. On April 20, 2017, full-time member of the Beijing Higher People’s Court judicial committee and Chief Judge of the Intellectual Property Tribunal, Baiyong Yang, provided an answer to whether the new type of Internet evidence preservation method -- the “time stamp” -- used in the “Canlingcao Official Weibo” copyright infringement dispute case, could be accepted: “Under certain conditions, it may be accepted by courts, but it will not be accepted universally without question. Time stamps on data messages should be appraised based on the qualifications of the service agency that issued the time stamp; the generation method of the time stamp; the credibility of timing and punctuality monitoring of the time stamp; the fees of the issuing agency; etc. Through a general appraisal, its ‘three qualities’ of evidence and its certification validity should be judged.”

Several Provisional Regulations on Electronic Data Storage and Use, issued by the Guangzhou Internet Court on March 30, 2019

The author selected several typical platforms and sorted out their evidence preservation methods, as seen in the image below: 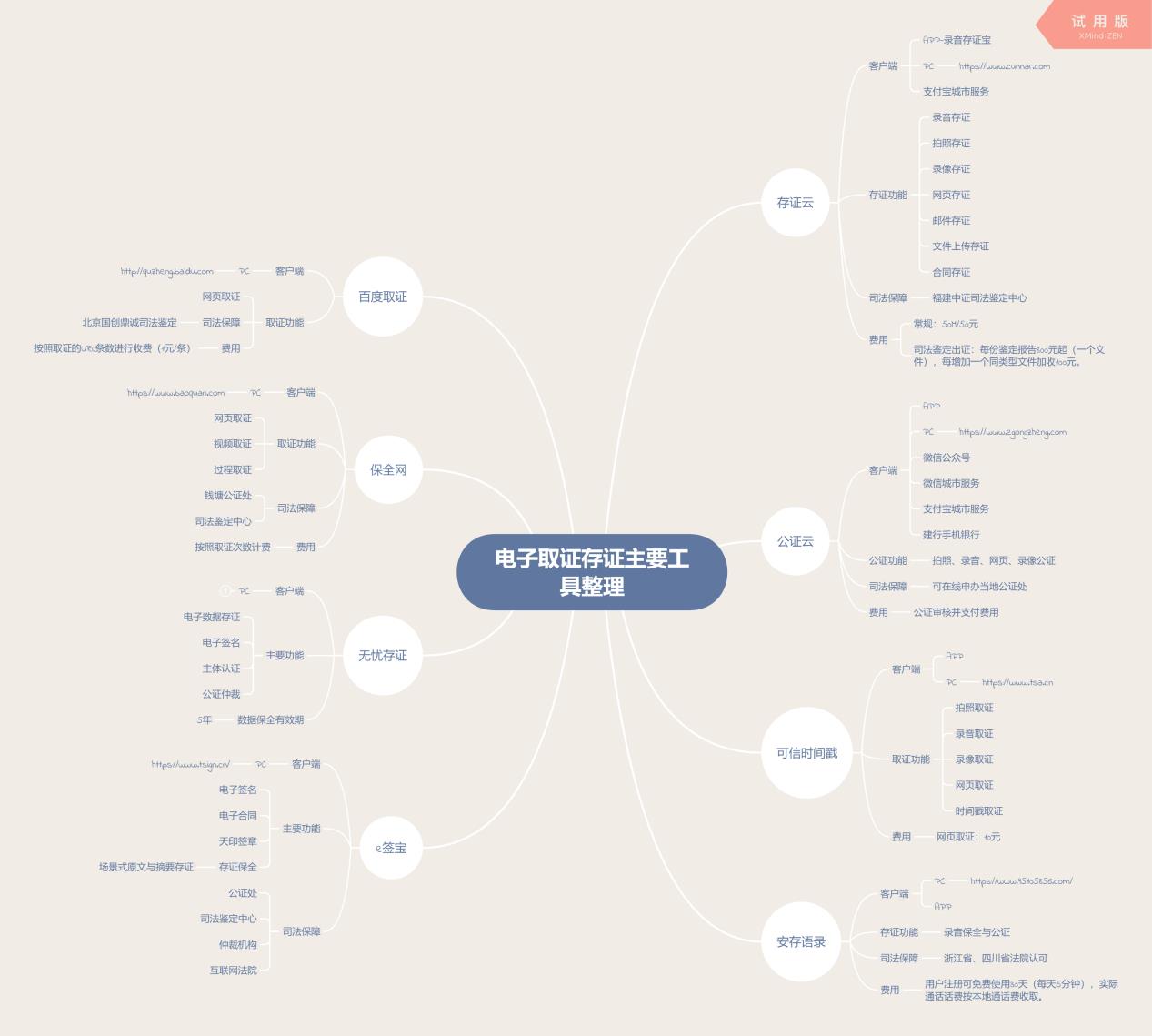 (2) The court extracts the electronic data, via authority of office or an involved party’s application;

(3) The platform compares the extracted electronic evidence and the previously stored electronic data, and imports the data into the litigation platform after verifying there are no errors.

In addition, according to the Hangzhou Internet Court electronic evidence platform homepage, its listed third-party platforms include: Safe Preservation, Fantai Alliance, E-passort by iCinFO, credible time stamps, China Cloud Signature, Yuanben, Baoquan.com, crowdsourced electronic contracts, Feiluoyin, Esign, and CFCA. However, because one cannot register on this platform, it is unknown whether third-party platforms are limited to the above only.

(2) Summary of viewpoints in judicial precedents

The key points in examination mainly involve the following areas:

(1) Examination regarding qualifications of the evidence preservation platform

Courts held that the third-party evidence preservation platform should be neutral and independent of both parties; in addition, it is best to perform inspection and certification through an official quality supervision and inspection center.

(2) Regarding authenticity of the source of electronic data

Courts held that data should be obtained through feasible automatic capturing programs, which take screenshots of webpages and inspect source codes.

(3) Regarding reliability of the technical means of evidence capturing & storage

The third-party evidence preservation platform must have received a Level 1 Website Security Certificate; servers were not infected by viruses or Trojans; operation process automatically completed by machines with low risk of human tampering; received appraisal and confirmation from a judicial appraisal center; and there is no contradicting evidence.

Courts held that investigation should be made into whether the electronic data was authentically uploaded, and whether the uploaded electronic data is the contentious electronic evidence, by examining the timing at which its trading hash value was generated and its stored content, as well as the consistency of hash values, respectively.

(5) Regarding relatedness of electronic evidence

The electronic evidence must mutually corroborate with other evidence.

Upon satisfying the above five requirements, evidence obtained via third-party electronic evidence preservation will have effect.

(The above listing is indiscriminate; for specific cases, examination content should be selected based on the case details.)

In the Beijing Quanjing Visual Co. v. Chengdu Daily infringement of works information network transmission rights dispute case (second instance), the court held that the company which provided the “Electronic Data Preservation Certificate” involved in the case is not a notarial institution. Hence, the involved preservation certificate is not a notarial document, and its recorded facts and documentation are not considered legal evidence that have been notarized through legal procedures. Additionally, there is no evidence showing the company had been licensed to provide electronic certificates, so the certificate it provided cannot be affirmed. The time recorded on the “Certificate” itself, when lacking technical explanation and corroborating evidence, cannot prove the event occurrence and authenticity of timing on its own. This shows that the procedure of obtaining evidence through the involved preservation certificate was not clean, standard, objective, and authentic.

On the whole, courts are accepting electronic data obtained through third-party evidence preservation platforms. Courts will not reject or raise standards of this type of evidence because third-party platforms are not yet statutorily identified; nor will they lower their standards due to a blind belief that technical methods used by these platforms are difficult to tamper with and hard to delete. In practice, courts still judge the effectiveness of electronic data evidence comprehensively, on a case-by-case basis.

When applying electronic evidence preservation technology to capture & store evidence, in addition to selecting a third-party platform with good qualifications, one should comprehensively consider the following four stages when analyzing the effectiveness of evidence:

1. Legal effect during the generation stage—the environment for capturing evidence should be clean, time of capturing should be objective, and the generated electronic data should be complete and authentic;

2. Legal effect during the collection stage—the procedure and tools used for collection should be standard;

3. Legal effect during the storage stage—the medium for storage should be difficult to tamper with, and stable;

4. Legal effect during the transferal stage—the copy should be identical to the original captured result; their consistency should not be changed from the transferal process.

In addition, one must pay attention to the legality of the means and actions used in capturing evidence. It is important to investigate whether the third-party platform’s means of capturing evidence or business model severely infringe upon others’ legal rights, break prohibitive laws or severely undermine public order. Furthermore, the electronic evidence fixated through third-party electronic data platforms is merely an issue of evidence, and will not necessarily directly prove intellectual property rights ownership; intellectual property rights ownership should be judged through “evidence + substantive law”.

The Watson & Band website is intended for informational purposes only. Nothing in this site is to be construed as creating an attorney-client relationship between the reader and Watson & Band or as offering legal advice on any specific matter. Since we are not providing legal advice through this website, you should not act upon any information that you might receive here without first seeking professional counsel. No client or other reader should act or refrain from acting on the basis of any information contained in the Watson & Band website without seeking appropriate legal or other professional advice based on the particular facts and circumstances at issue.